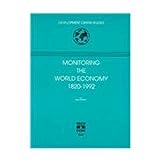 The heightened interest in economic globalism in recent times makes this a timely book. At the behest of the OECD Angus Maddison, arguably the dean of scholars on the history of the world economy, summarizes the available data and research on trends in the global economy during most of the modern era, defined as the period since the Industrial Revolution. The OECD's offer also affords Maddison an opportunity to synthesize and summarize his views on world economic integration after a long career studying the subject. This volume, therefore, will be widely welcomed and perhaps accepted in some quarters as a definitive treatment, especially since a standard of "Maddison reliability" for historical international economic data seems to have replaced the former "Kuznets standard" among academics. Currently only Alan Heston and Robert Summers, leaders of the International Comparison Project, have similar stature. Yet their work, which Maddison utilizes extensively, lacks Maddison's breadth.

The book's main contribution consists of consistent estimates of GDP, population, and GDP per capita for the period 1820 to 1992 for fifty-six countries accounting in 1992 for over 90 percent of world product. Other, less complete, series are presented for related magnitudes, including employment, exports, capital stocks, and several measures of productivity. Maddison relies on a wide range of sources, corrects for discontinuities in series, and makes adjustments in data provided in the various sources to achieve comparability and continuity. The appendices contain most of this information and are the heart and soul of the volume. The data are accompanied by a concise, general analysis of the major forces accounting for the long-run economic growth and development of countries within the framework of a growing world economy. The analysis is non-Marxist.

Maddison's prestige as an economist and the OECD's imprimatur make the new data set a seductive one. It should be labor-saving, thereby raising scholarly productivity in both teaching and research. It will stimulate research in world economic history, which, though growing, remains peripheral to the larger academic agenda. It is informative about the thoughts, conjectures, and conclusions of a distinguished senior scholar in the later stages of a remarkable career. Still, several words of caution are in order.

The book's title, first of all, is misleading. There is little useful content for the years before roughly 1870, especially with respect to the non-Western world. Some income estimates and other economic data going as far back as 1820 are offered, but Maddison's tone in presenting these is insufficiently tentative. Early per capita income estimates sometimes are proferred only for it to be revealed in other tables that important concomitant or supporting data are not available, raising many obvious questions. Maddison's determined and persistent efforts to push income estimates for poor countries back in time are laudable, but the results still must be taken with many grains of salt.

Maddison's presuppositions in this area, incidentally, were formed during the mid-twentieth century, when Western scholars habitually underestimated Third World incomes. Until recently Maddison has been a critic of the Heston-Summers upward revisions, although this volume suggests that he has finally joined the mainstream. Nonetheless, it is well to remember that Maddison long has lowballed historical income estimates for the less developed world. One of his students, Pierre Van der Eng, recently raised Maddison's historical estimates for Indonesia. Although Maddison himself deserves great credit for his adaptability and intellectual integrity, many of his historical estimates for poor countries must be regarded as provisional and his judgments tentative even when, as is common, he omits caveats.

Finally, users of this volume should be aware that during his long career Maddison has been fortunate in escaping the minute scrutiny and evaluation to which Heston and Summers and other scholars in this general area have been subjected. Maddison's enviable reputation is well deserved, yet as Van der Eng and some of my own work have shown, the natural tendency to accept Maddison uncritically must be resisted. His historical income estimates for LDCs, for example, are less consistent with general trends in the world economy than some I derived from the work of other scholars. These are arcane matters, to be sure, but users of this volume should understand that much more work will be required before historical income estimates for most of the world can be confidently accepted. With respect to developed countries, however, historical estimates, especially after 1900, are more reliable. On these, Maddison stands on firmer ground.

Copyright (c) 1997 by EH.Net and H-Net, all rights reserved. This work may be copied for non-profit educational use if proper credit is given to the author and EH.Net. For other permission, please write review.editor@eh.net.

If there is additional discussion of this review, you may access it through the network, at: http://eh.net/.

Copyright © 1997, EH.Net and H-Net, all rights reserved. This work may be copied for non-profit educational use if proper credit is given to the author and the list. For other permission questions, please contact the EH.NET Administrator (administrator@eh.net; Telephone: 513-529-2850; Fax: 513-529-3309). Published by EH.NET.