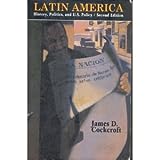 As the United States becomes increasingly tied economically, politically, and socially to its neighbors to the South, the need for U.S. knowledge of Latin America and its peoples increases proportionately. However, relatively little is known. News of the vast region reaches the public in the context of natural disasters, drug raids, and political coups. In most classrooms Latin America is dealt with as a singular unit and the definitive texts of Latin American history are eight-hundred-page volumes crammed with information about the Caribbean and the twenty-one countries of Central and South America from the Mesoamerican era to the present day. Until Latin America is treated by scholars and, more importantly, accepted by the public as a diverse, culturally rich area deserving of intense study and respect, people of the United States will never "know" Latin America.

James Cockcroft's attempt to open a window of understanding on Latin America comes in the form of one of the more comprehensive texts of twentieth century Latin American politics and history (xv). The author also examines U.S. foreign policy toward the region while attempting to provide a capsule of U.S. foreign policy debates. Following Neighbors in Turmoil, first published in 1989, Latin America: History, Politics, and U.S. Policy is a revised second edition. In the newest version, the author proposes to take "into account the demise of Stalinism" and "the question of U.S. policy in a 'post-Cold War' world" (xi). Cockcroft also praises his own identification of "such hot topics as NAFTA,...narcotrafficking, and the environment" (xii).

Cockcroft includes in this massive text 1) an historical overview; 2) three parts organized by region: Mexico and Central America, The Caribbean, and South America; 3) a conclusion; and 4) an appendix of documents. Each of the three major parts is introduced by what Cockcroft considers key thematical issues for each region, such as U.S. intervention, and economic and policy debates. Each country is then dealt with individually.

Cockcroft structures his text with subject headers which are useful and, in a text of this size, almost necessary guides for the reader. The author's Selected Bibliography follows each chapter and includes not only books, but also a constructive sprinkling of films and professional journals. In addition, the Appendix of documents is a useful supplement of primary source information to the text.

Interspersed throughout the text are "see also" references. Though footnotes with explanations or definitions would have been helpful, the author's uses of, for example, "See also Parts One and Two," are too vague and the frequency of the parenthetical citation breaks the flow of text. To have the reader simply use the index seems more logical. More detailed maps and more photographs would have augmented existing geographical information as well as enhanced the book's aesthetic appearance.

In his fifty-page historical overview, Cockcroft leads the reader through a maze of concepts and interpretations, particularly modernization and dependency theories and the concepts of import substitution and sustainable development. He also defines essential political terms including populism, corporativism, and authoritarianism (17-18). Though Cockcroft is identifiably sensitive to the differences within the region and within specific countries, he notes commonalities among the Latin American nations, including the influential role of the Catholic Church, personalismo, patriarchical and macho norms, and monoculture (7).

Though vague in his description, Cockcroft analyzes the emergence of "new politics," which he defines as the rising up of average citizens against the traditional centers of power (i.e. political elite, the military, and foreign political and economic interests) (31). In a much more cohesive analysis, the author also examines Liberation Theology and the "New Marxism" in Latin America (27).

Cockcroft's biases are clearly put forth in a summary of U.S. foreign policy toward Latin America; he succinctly defines U.S. motivations as based predominantly on economic objectives. Policy-making is a complex process which is determined by ideology, economics, public opinion, special-interest groups, national security interests, bureaucratic politics, and the international environment, among others. If Cockcroft had listed some of the other factors in determining U.S. foreign policy, it would have given the reader a more accurate representation. Instead, Cockcroft simply states, "While the official explanations for U.S. interventions...were U.S. commitment to 'freedom of democracy' and 'defense of national security,' the underlying motivation was invariably economic" (39).

Cockcroft's tendency to over-simplify U.S. foreign policy-making is again evident in his sparse treatment of the Monroe Doctrine. The author implies that the formulation of the Monroe Doctrine was a calculated step to justify later U.S. interventions in Latin America (39). Many historians agree that the Monroe Doctrine was formulated as a response to the events in Europe. The issue of whether it was directed specifically toward England, Russia, France, the Holy Alliance, or against monarchy in general, is debated. However, most concede that it was not enunciated predominately to provide a doctrinal justification for U.S. interventions in Latin America. A brief passing remark in Part One referring to the Doctrine as "originally aimed at the British" (67), is the only context given for its formulation.

Similarly, Cockcroft states that U.S. policy-makers "sidestepped the United Nations" in formulating the Rio Pact, which he labels "a legally binding regional 'self-defense' approach for future U.S. covert and overt interventions...in the name of combatting Communist aggression" (41). This statement fails to give the overall context of the situation and over-generalizes in defining all policymakers as single-minded soothsayers bent toward the exploitation of Latin America.

However, as necessary as it is to put U.S. motivations and actions in context, it is just as essential to chronicle blatant U.S. interference and intervention in Latin America and the Caribbean. In the thematical overview to Part II and in the proceeding chapters, Cockcroft provides a thorough evaluation of the last three decades of U.S. intervention in the Caribbean. Nevertheless, Cockcroft's portrayal of the Iran-Contra affair in the subsequent overview of Central America would make one question whether he was reading a textbook or the script to an Oliver Stone movie. In less than four pages, President Bill Clinton, his two Republican predecessors, their staffs, the FBI, CIA and DEA are all implicated in the Iran-Contra affair (61-64).

Even though Cockcroft's work is intended as a textbook, such generalizations without citations results in a lack of credibility for his assertions. As a proposed text for both history and political science students (xv), Cockcroft has obviously structured his work to fit the second audience. Most historians endeavor to give a citation for every quote and to frame every opinion within a broader context. Political scientists, when not constructing some sort of methodology, try to trim away some of the fat and get to the meat of an argument or issue without devoting much time to context or primary source citation.

When making such forceful accusations it would seem prudent to support them with evidence. However, Cockcroft's approach does generate debate. In the preface, Cockcroft writes, "I have found that focusing on controversy is an effective method of instruction, as this text in fact reflects" (xvii). In this effort, Cockcroft is utterly successful.

Indeed, much debate should stem from the chapter on Cuba alone, which could easily be described as a testimony to the effectiveness of Castroism. Cockcroft emphasizes improvements of the Cuban standard of living under Fidel Castro in comparison to the conditions under the Fulgencio Batista Regime. The author details how health care, education, housing standards and literacy rates all climbed, while the status of women in the workforce and in society as a whole rose. Critical statements about the Castro Regime are limited and weak; examples Cockcroft uses are the ill effects of socialized medicine on already practicing doctors and the suppression of the free press, which Cockcroft states "made for dull reading" (300). While criticism of the Castro Regime is lacking, the author does strongly criticize the policy-making decisions of Washington.

Certainly, the argument can be made that so much critical information is circulated about the Castro Regime that, for the purposes of debate, casting a different light on the subject is beneficial. In dealing with South America, the author focuses less on the weaknesses of U.S. policy and more on contemporary problems within the region (i.e. military domination and violence, and political corruption).

Concentrating on the "Challenge for Policymakers" in his Conclusion, Cockcroft lists policy alternatives proposed by different U.S. groups like PACCA (Policy Alternatives for the Caribbean and Central America) and PLAN (Progressive Latin Americanist Network) (671-672). The author also encourages policymakers to be more sensitive to the demands and expectations of the Latin American general populace. In short, Cockcroft states that "the dilemma for policymakers was how to embrace the new politics instead of remaining part of the problem the new politics was confronting" (682). Alternative policy recommendations are also included within the Appendix, along with documents concerning environmental issues, Iran-Contra hearings, and a message to Congress from President Ronald Reagan.

Overall, Cockcroft's work is a commendable attempt to increase awareness of Latin America, its problems, and the short-comings of U.S. policy toward the region. The major problems with the text are its oversimplification of U.S. foreign policy formulation and its categorization of the United States as an exploitative, imperialist power whose corrupt, immoral political leaders, manipulated by big business, purposefully exploited the vulnerable nations of Latin America for their own evil ends.

In this vein, author and historian Robert Freeman Smith wrote: "Too many recent books on U.S.-Latin American relations use simplistic, monolithic interpretations to explain everything. The United States is cast as the evil monster pursuing the domination of an innocent Latin America with single-minded determination. The State Department, corporations, and the CIA all are pictured as working as a unit to achieve this objective. Ideological folklore rather than history is the end product. The historical reality has been much more confused and ambiguous. There have been attempts to influence and control, but the historian must be very cautious not to assign a high degree of order, coherence, and single-minded planning to U.S. actions regarding Latin America" (viii).2

Unfortunately, Latin America falls under this category. Similarly by emphasizing U.S. actions and Latin American reactions, the author inadvertently relegates Latin Americans to a passive, second rate, defenseless class. As historians and political scientists, we should endeavor not to be Latin American apologists just as much as we hope to shun Anglo- or ethnocentric biases in writing.

Still, Cockcroft's work obviously will generate debate in the classroom, as this is an essential tool of learning. Presenting controversial information to the student affords him the opportunity to seek out the "truth" and formulate his own opinions. If this is the intent of the instructor, Cockcroft's text constitutes an ideal facilitator.

2. Quote from editor Robert F. Smith in the preface of The United States and the Latin American Sphere of Influence, vol. 2, 1983.

Copyright (c)1996 by H-Net, all rights reserved. This work may be copied for non-profit educational use if proper credit is given to the author and the list. For other permission, please contact H-Net at h-net@h-net.msu.edu.

If there is additional discussion of this review, you may access it through the network, at: https://networks.h-net.org/h-latam.

Copyright © 1996 by H-Net, all rights reserved. H-Net permits the redistribution and reprinting of this work for nonprofit, educational purposes, with full and accurate attribution to the author, web location, date of publication, originating list, and H-Net: Humanities & Social Sciences Online. For any other proposed use, contact the Reviews editorial staff at hbooks@mail.h-net.org.