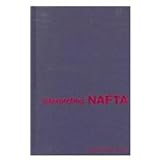 The Institutions, Interests, and Symbolic Meanings of NAFTA

This interesting book grew out of the practical experience of the author, Frederick W. Mayer. Mayer received an International Affairs Fellowship from the Council on Foreign Relations to spend a year in Congress working for Senator Bill Bradley to help pass NAFTA through the Senate. The book is timely and salient considering the recent protests in Seattle against the World Trade Organization (WTO). Understanding the political context in which opposition to NAFTA grew is helpful not only to understand the eventual passage of NAFTA but also to understand the growing popular backlash against free trade.

The organization and presentation of the book create a pleasurable and readable text. Mayer begins each section with a historical discussion, followed closely by a theoretical discussion. Theories are thus skillfully used to illuminate the historical events.

In his analysis, Mayer first focuses on the institutions, interests, and symbolic meanings of NAFTA. He aims to provide a history of NAFTA, including the decision to participate in, the negotiations on, and the battle to approve the agreement in the U.S. Congress. Second, he provides a political analysis of these events to answer three main questions: "Why did the nations of North America decide to negotiate? Why did the agreements take the form that they did? And, why was ratification so fiercely contested in the United States?" (p.1). Third, he engages a fundamental point about the value of studying particular events, not to "demonstrate the validity of general theories about politics" but to explain the event (p. 2). In this last aim, Mayer succeeds in being open-minded and practical about the choice of various approaches to political science. He states "the issue is not whether the rational choice, institutional process, or symbolic constructivist approach is correct ..., or whether domestic politics does or does not matter, but rather which lenses are most useful for interpreting a particular phenomenon" (p. 6). Mayer draws on his personal experience working for Senator Bradley to gain passage of NAFTA; he also used newspaper articles, transcripts, press releases, advertisements and other NAFTA documents, in addition to over two hundred interviews for his text.

The strength of the book is his discussion of the United States. Readers looking for in-depth discussions of the Canadian and Mexican cases may be disappointed. However, this is not because the two countries are neglected. Mayer discusses these countries in terms of the international negotiations and he focuses on some of the domestic constraints on their national positions. But many of his questions specify only the American case, so a subsequent focus on the United States is not surprising. The richly detailed discussion of the American case may leave readers a bit greedy for the same level of detail in the others. However, at a length of 343 pages, expectations for the same treatment of Mexico and Canada would have added hundreds of pages and detracted from some of the main arguments of the text.

The book is well organized around specific questions. Mayer does not limit his analysis to any specific approach, but fits the approach to the question at hand. The first two chapters include an outline of the questions, coverage of the main theories, and discussions of the assortment of theoretical lenses to be used. In chapter three, Mayer asks why the nations of North America decided to negotiate. To answer this question, Mayer moves beyond typical theories of international relations and looks within the countries. "The problem in international trade is not fundamentally international. It is, rather, a problem of domestic politics. Nations negotiate international trade agreements to solve a domestic problem" (p. 60). In chapter four, he asks why fast-track authority became an intense political issue, why labor and environmental groups became so important, and why fast track passed? His discussion of how the opposition formed was particularly rich. "The significant opposition, therefore, came not from the traditional source - protectionist producers - but rather from a new coalition of labor unions, environmentalists and grassroots groups" (p. 70).

To answer these questions, Mayer used both rational choice and an analysis of the institutional context. Rational choice is a theory common to political science and economics that investigates the possible courses of action, rational beliefs about the alternatives, and the preferential ranking of these alternatives. Individuals unfamiliar with this approach need not fear. Mayer presents rational-choice theory (and the other theories he employed) conceptually, as opposed to technically, in a way that will allow a broad audience to enjoy and learn from the book.

In chapter five, Mayer examines how NAFTA evolved as it did. He analyzes the atypical nature of opposition to NAFTA and fully considers the active mobilization of labor and environmental groups. He also covers the sticking points in the agreement, such as the agricultural and financial services industries. In this chapter, he uses a two-level game to "map from observable characteristics of domestic politics to international outcomes" (p. 163). In this way, Mayer was able to analyze how domestic interests translated into national interests. Chapter six focuses on the side agreements on labor and the environment. Negotiations were constrained both by U.S. domestic demands for protection on the two issues and by Mexican and Canadian demands that there would be no reopening of the NAFTA text. To examine this situation, Mayer uses a three-level approach, adding an individual level of intra-group bargaining to the domestic lobbyists and national interests. "In the side negotiations, bargaining processes were deeply nested, that is, bargaining among individuals within groups affected the bargaining behavior of groups at the domestic level and, therefore, ultimately of the nation at the international level. Second, [he argued] we must widen the approach to consider the broader political landscape in which the domestic-level bargaining was embedded, which in the United States was determined largely by anticipation of the upcoming Congressional implementation process" (p. 206).

In chapter seven, Mayer attempts to explain the breadth and depth of the opposition to NAFTA in the United States. Instead of using rational choice, Mayer looks to the symbolic meaning of NAFTA to specific groups. Here he uses a "theory of narrative politics, in which understandings of politics and interests in them, are structured by the stories of politics told by and to communities of individuals" (p. 258). In this interesting chapter, Mayer weaves a discussion of "rational ignorance," as originally espoused by Downs, into a discussion of the symbolic politics and the entertainment value of the politics of NAFTA. In chapter eight, Mayer focuses on the battle over ratification. He uses a multi-level, multi-mode theory of congressional action.

Overall the book is an excellent example of using theory to illuminate a particular event. Mayer examines the politics of NAFTA, including "across the international bargaining table, in the corridors of Congress, in corporate boardrooms and union halls, and over dinner tables" (p. 336). He used and applied "theories concerned with bargaining among nations, interest groups, and individuals within interest groups; with institutional structures at the international level, the national level (constitutional structures), and the subnational level (within the U.S. Congress); and with constructed meanings held by international, national and subnational communities" (p. 336). Institutions, interests and ideas are effectively discussed. As he states, "the question then is not which theory is right, but which theoretical approach is most appropriate for the problem at hand" (p. 338). Mayer skillfully weaves a coherent analysis of the politics of NAFTA using numerous analytical lenses in a way that will benefit students and scholars from multiple disciplines.

Copyright (c) 2000 by H-Net, all rights reserved. This work may be copied for non-profit educational use if proper credit is given to the author and the list. For other permission, please contact H-Net@h-net.msu.edu.

If there is additional discussion of this review, you may access it through the network, at: https://networks.h-net.org/h-pol.

Copyright © 2000 by H-Net, all rights reserved. H-Net permits the redistribution and reprinting of this work for nonprofit, educational purposes, with full and accurate attribution to the author, web location, date of publication, originating list, and H-Net: Humanities & Social Sciences Online. For any other proposed use, contact the Reviews editorial staff at hbooks@mail.h-net.org.