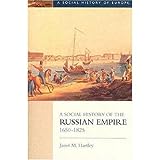 Janet Hartley's volume on the Russian Empire introduces a new series from Longman dedicated to exploring the social histories of different peoples of Europe at decisive stages in their development. The book sets a high standard for those to follow, fulfilling the publisher's claim for the series that each volume "while synthesizing the latest scholarship in the field, will be invigorated by the findings and preoccupations of the author's original research" (p. ii). Hartley demonstrates an admirable command of recent literature and supplements this with information and insights gained from her own work in archives and repositories in London, Moscow, and St. Petersburg. Particularly interesting and effective is her extensive use of foreigners' accounts.

Hartley's choice of chronological parameters for her study is felicitous. The extension of the eighteenth century, from 1650 to 1825, permits a more accurate analysis of Russian social development, one which integrates the reforms of Peter I into a continuous process. Both before and after Peter, Russia's rulers sought to shape and mold Russian society. The question is how successful were they in their efforts? Few historians would argue with Hartley's conclusions. Significant social change occurred in this period, but its impact was uneven, its consequences frequently unanticipated, and the successes of government policy and initiative were offset by failures.

Following a description of the land and peoples of the Russian Empire, the discussion is organized into ten essays focusing on different aspects of Russian society as it evolved in the eighteenth century. This first chapter includes a useful overview of the ethnic diversity, and concomitantly of the religious diversity, which characterized the Russian Empire--an Empire in which the Great Russians comprised less than half the population by the end of the eighteenth century. Having whetted the reader's appetite, however, the remainder of the book concentrates on Great Russia and ethnic Great Russians. Given the uneven nature of the literature on the non-Russian areas of the Empire and space constraints, Hartley's decision thus to focus her discussion is understandable, if disappointing.

Chapters Two through Four explore the social estates, their rights and obligations, and the institutions through which they acted. Government policies, such as Peter I's poll tax and Catherine II's policies towards the non-Russian periphery, encouraged the simplification of the social structure and the assimilation of all categories of the population into the four mainstream estates (nobles, clergy, townspeople and peasants), but with limited success. As older "miscellaneous" groups, such as single homesteaders [odnodvortsty,] slaves, etc., were absorbed (generally into the peasantry), new "miscellaneous" categories, including non-noble officials and clerks, emerged and were lumped together as "people of various ranks" [raznochintsy]. Hartley's discussion emphasizes the heterogeneity of the different social estates and the porosity of their borders in this period.

From the perspective of estates, Russian social structure remained complex and relatively dynamic despite government policy. From the perspective of rights and obligations, the picture that emerges in Chapter Three is somewhat different. Peter I's poll tax effectively drew a line between privileged and non-privileged members of the population. Nobles, ordinary soldiers and members of the clergy served the state and were exempt from the poll tax. Others were unprivileged; they were obliged to pay the poll tax. For nobles, service to the state was transformed from obligation to privilege in 1762; the exemption from the poll tax remained. Social complexity masked fiscal simplicity in relation to the state. Privilege was a relative concept, as the clergy well knew, and the notion of rights was problematic.

Institutionally, the organizations of the least privileged, the peasant commune, retained an independent role vis a vis the state. It was also the most robust and vital of the estate institutions, notwithstanding the efforts of the state to encourage and nurture the urban dumas and noble assemblies. Hartley attributes the weakness of the urban institutions to the "essential instability of the towns" and the weakness of the noble institutions to the "poverty and low cultural level" of many provincial nobles (p. 99).

A town population in flux and a provincial nobility that fell considerably short of gentility may have contributed to weak urban dumas and noble assemblies, but the dependent relationship of both these groups to the state may well have been more important. In eighteenth-century Russia, privilege was inseparably linked to dependence on the state. Dependence on the state impeded the development of the very corporate identity the state was seeking to stimulate. As Hartley notes, when a noble corporate identity did take shape in the early nineteenth century it defined itself in opposition to the state and its policies (p. 259). By the middle of the century a more independent nobility supported more robust estate institutions.

Russian rulers encouraged and funded education and welfare, defining both activities as properly within the sphere of the state. Hartley maintains that considerable progress was made in both areas, although the limitations emerge in the discussion of "lifestyle" (Chapter Eight). For peasants--few of whom had access to education--social behavior and material culture changed little over the whole period. Life in the towns changed more dramatically, but the extent of the change was linked to the size and importance of the town. Hartley notes the transformation of the lifestyle of the Russian nobles, but correctly urges caution and warns against exaggerating the gulf between a "Europeanized" nobility and the "Russian" ordinary people.

The division between wealthy, educated nobles based in St. Petersburg or Moscow and poor, poorly educated provincial nobles was at least as great as that between nobles and common folk (pp. 192-95). Like "lifestyle," family customs were tenacious. Again, wealthy, educated nobles living in St. Petersburg or Moscow (that is, close to the ruler) experienced greater change beginning with the policies of Peter I. Nevertheless, attempts to legislate against partible inheritance failed. For the majority of Russians, family size and composition, the household and relations within it, marriage customs and the like changed little over the long eighteenth century, although there is some evidence of more formalized funeral rituals among some of the nobility at the end of the period (p. 212).

Russia, of course, did change in one hundred and seventy-five year, pushed by reforming rulers. The change, however, was slow and uneven. Ironically, members of the educated noble elite, who had been the primary beneficiaries of the educational and cultural programs pushed by the rulers, turned critical eyes upon the state which had nurtured and formed them and found considerable room for improvement. As Hartley expresses it, "the Russian regime was a victim of its own success"--a warning perhaps for all reforming despots!

A social history of the Russian Empire over a long eighteenth century is a difficult task, and a relatively short book devoted to such a large topic faces the danger of becoming a series of short essays, with only tenuous links one to another. Brief summaries at the end of the chapters, linking each to the larger themes, help to maintain the continuity. These summaries and the well-written and well-organized text overall make this an excellent introduction to early modern Russia for undergraduates. The synthesis of recent literature and the thoughtfully selected bibliography will make it equally useful as a starting point for more advanced students.

Copyright (c) 1999 by H-Net, all rights reserved. This work may be copied for non-profit educational use if proper credit is given to the author and the list. For other permission, please contact H-Net@h-net.msu.edu.

If there is additional discussion of this review, you may access it through the network, at: https://networks.h-net.org/h-russia.

Copyright © 1999 by H-Net, all rights reserved. H-Net permits the redistribution and reprinting of this work for nonprofit, educational purposes, with full and accurate attribution to the author, web location, date of publication, originating list, and H-Net: Humanities & Social Sciences Online. For any other proposed use, contact the Reviews editorial staff at hbooks@mail.h-net.org.