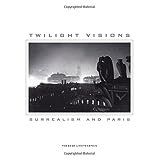 Surrealist Photography and the Inner Life of Paris

In a 1931-32 photograph entitled “Shop Window,” an old woman gazes into a brightly lit Parisian storefront. The observer, her back turned to the camera, watches from the shadows; we see only her heavy coat and shoes, a corner of her handbag, the top of her winter hat. The window display, by contrast, opens itself up to us: two smiling mannequins gesture theatrically outward, as if presenting the wares on sale. The plaster mannequins are modeling lingerie, and are thus dressed as scantily as the observer is heavily bundled, part of an illuminated display of ethereal forms in white lace. One of a number of similarly-themed photographs by the Hungarian-born polymath artist Brassaï, the image dramatizes the irony of consumer capitalism: in spite of their static poses and frozen smiles, the sales models appear sunnier and more alive than the shrouded observer watching from the winter street. The shop window offers a spectacle of intimacy, one of the characteristic ironies of Parisian nocturnal life documented in Brassaï’s photography.

In featuring such images, Twilight Visions: Surrealism and Paris, a recent volume of essays and photographs edited by Therese Lichtenstein, demonstrates how nocturnal photography of the 1920s and 30s altered the imaginative landscape of urban Paris. The encounters with interior space dramatized in Brassaï’s photograph--whether window displays, public spectacles, intimate scenes, or commercial and artistic expositions--are as fundamental to urban life in Paris, Lichtenstein suggests, as the Haussmanian grid or the political-economical landscape of its quartiers. As represented in Twilight Visions, the city unfurls as a concatenation of enclosed spaces, rather than as a panorama or totalizing vista. Even the most panoptic images of Paris included in the volume--such as Gino Starace’s 1913 cover painting for the first Fantômas novel, or André Kertész’s 1929 photograph “Broken Plate”--present broad vistas rendered finite, reduced to the scale of an interior: in Starace’s image the city is miniaturized by the looming figure of the master criminal Fantômas, who strides elegantly across it. In Kertész’s photograph, the Parisian skyline is visible only as the reflection in a broken pane of glass; the empty hole in the pane indicates that it is not the city we see sprawled out before our eyes. Rather, the living city is somewhere behind us, out of view. As is the case with any photographic image, even a panorama emerges within the enclosed space of a glass plate.

The photographs included in Twilight Visions, the companion volume to an exhibition of surrealist photography likewise curated by Lichtenstein, document not only a nocturnal Paris, therefore, but a Paris comprised largely of interiors--an inhabited and even haunted city whose streets, night clubs, and exhibition spaces become sites of social encounter and historical change as well as spectacle. In spite of the volume’s principal attention to the surrealist movement--the group of poets, artists, and intellectuals with which many of the photographers in the exhibition were associated, however loosely--its essays each reflect this idea of interiorizing the city. Indeed, beyond Lichtenstein’s introductory overview, the volume’s essays are progressively intimate in their subject matter; alongside brief photographic interludes (“Darkly Lit Streets,” “Windows on the City,” “Marvelous Encounters,” “Portraits After-Hours,” and “Surreal Figures”), the essays discuss, in turn, surrealist office space, French public exhibitions, and the photographic representation of female bodies by women artists of the surrealist movement. Constituting independent essays on various aspects of interwar Parisian surrealism rather than a catalogue or Baedeker to the “Twilight Visions” photography exhibition, the essays are often only tenuously linked to the study of either photography or urban life. Yet this thematic variation is part of the volume’s appeal: in the eyes of the surrealists, Paris constituted the site for all manners of encounter, imaginary as well as physical, political as well as sexual. The volume’s wandering construction--itself a kind of dérive from place to place--thus reflects this fundamental insight.

As Lichtenstein notes in her introductory essay to the volume, the “twilight sensibility” of interwar surrealist photography runs counter to the “conventional, idealized view of the city’s historic monuments” found in mass-produced imagery of the period (p. 13); it privileges instead the Nietzschean project of depicting its “living history.” Lichtenstein’s notion of a “twilight sensibility” corresponds with Walter Benjamin’s notion of a “profane illumination,” describing surrealism’s attention to overlooked vernacular objects and places as potential sites of poetic excitement, and even of political awareness.[1] As Lichtenstein suggests, the photographers whose work fills the pages of Twilight Visions not only “created a kaleidoscopic vision of Paris through their images of ordinary streets, architecture, store windows with mannequins, flea markets, cafés, dance halls, and anonymous passersby,” but also shot “from unexpected vantage points and employ[ed] unusual lighting,” thus giving expression to the “unsettled atmosphere of the period” (p. 18). For indeed, the living history of interwar Paris was hardly free from political tension, as intellectuals and the public alike grappled with the legacies of World War I, the Russian Revolution, and anticolonial uprising in Morocco; with radical shifts in gender and domestic relations; and, increasingly, with the deepening threat of fascism. Experimental photography by artists associated with the surrealist movement thus illuminated the “twilight” of a city “in transition between tradition and modernity” as well as between turbulent political forces (p. 3).

Julia Kelly’s essay, “The Bureau of Surrealist Research,” offers a compelling study of the movement’s early efforts to maintain a public space for its experimental research. From October 1924 through April 1925, the surrealists operated a working space near what is now the Musée d’Orsay, where the group would congregate and work, as well as keep public office hours. Though short-lived in itself, the legacy of the Bureau in surrealist practice was a long one, informing the group’s interest in collecting and exhibiting objects, as well as their attention to the documentary value of objects themselves. Though it bears little on photography, Kelly’s essay represents an invaluable contribution to scholarship on the surrealist movement, and suggests, too, the extent to which research into urban life can take place indoors.

The final essay in the volume, Whitney Chadwick’s “Mythic Woman/Real Woman,” begins at the same 1938 surrealist exhibition, launching into a wide-ranging discussion of “the experience of actual women who by the late 1930s shared both Surrealism’s geography and its commitment to reconfiguring the relationship between male and female creative principles” (p. 147). Chadwick admirably features the work of Denise Bellon, a photojournalist who documented the 1938 exhibition (although Josef Breitenbach, whose images of the same exhibition figure heavily in the Twilight Visions volume, deserves similar treatment elsewhere in the volume). Chadwick’s essay offers a concise survey of women photographers affiliated with the surrealist movement, including Claude Cahun, Lee Miller, Nusch Éluard, Dora Maar, Toyen, and Jacqueline Lamba; it concludes with a discussion of a number of surrealist women artists known for their painting, including Leonor Fini, Frida Kahlo, and Leonora Carrington.

As a whole, Twilight Visions offers a readable, approachable survey of the surrealist movement’s visual culture during the 1920s and 1930s, teasing out the various inflections of the movement’s “twilight sensibility.” As a book about surrealist photography, it offers a number of valuable historical insights and directions for future study, while lapsing into the occasional generalization (such as the claim that “nearly all” the surrealists “spent the bulk of their adult lives in the confines of the city [i.e., Paris]”--a remark that holds true for certain members of the group but not for its international adherents (p. 117)). As a book about urban photography, Twilight Visions functions more obliquely, yet in many ways more provocatively: through the shift in focus from the monumental to the intimate, surrealism--and surrealist photography in particular--becomes critical to the study of Paris itself. Twilight Visions thus stands beside other recent books on the city, from Ian Walker’s City Gorged with Dreams (2002) to Michael Sheringham’s Everyday Life: Theories and Practices from Surrealism to the Present (2009), as a testament not only to the Parisian imprint upon surrealist art, but of surrealism’s contribution to the documentation, analysis, and even transformation of urban life.

If there is additional discussion of this review, you may access it through the network, at: https://networks.h-net.org/h-urban.