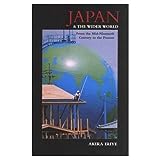 Iriye bases this review of modern Japanese foreign relations on two earlier works, Nihon no gaiko (1965) and Shin Nihon no gaiko (1991). He begins in 1868, not 1853, and ends about 1990, after the end of the cold war but before the current economic difficulties or the end of the Soviet Union. He includes a useful survey of English-language literature, has no notes, and says nothing about the sources he used. Those who have read Across the Pacific will find themselves in familiar territory--this is a work about the socio-intellectual framework of foreign relations.

I'd consider using this book just for the cover. Against a corner of bright, grey industrial sky, a spherical gas tank--its gleaming, sun-reflecting surface a map of the world--squeezes its bulk into the photographic frame. In the foreground a single carpenter squats on the roof of a half-built house, his back to the looming globe. It is entirely blue and green, except for a half-visible streak of red on its edge, which marks Japan's place in the "world." This crowded photograph is a catalog of cliched dichotomies--the wood and tile of "traditional" houses vs. the steel and gas of the tank, global "reality" vs. Japanese insularity, Japanese fragility vs. the explosive outside world, Japanese dependence vs. the world's indifference, and others of gender, capital, and nature. Iriye's organizing metaphor for his review of modern Japanese foreign relations is this dichotomy between Japan and the greater world. In principle, then, the "international environment," as he puts it, is to receive much more attention than bilateral relations. In practice, relations with Britain, the United States, China, and much less, Russia, dominate the book.

Put another way, Iriye combines Japanese writers' speculations on their nation's place in the world or Asia (he calls this perceived reality), with the reality of an international environment--actually, largely relations with first Britain, then the United States. He ends by saying that Japan has benefited from this environment--its interests have been ensured by "factors generated elsewhere so that its policy has tended to consist of fitting itself into the environment. That has not required much intellectual effort" (p. 188). That is, Japanese pursuit of security and economic interests has, for much of its modern history, not conflicted with international order. There have been two long windows of opportunity for Japan to pursue its interests with little restraint--the first beginning in the Meiji Period and lasting, Iriye suggests, well into the 1930s-the second, the cold war era. The first ended with the failed attempt to construct an Asian order independent of the international order. Now, Iriye says, Japan again will be forced to adapt to a change of environment, and must actively join and strengthen the international community. In a noteworthy passage (p. 8), Iriye locates the beginnings of Japanese foreign policy pragmatism in the congruence between Japanese goals of state-building and the relative lack of great power interest in East Asia in the late nineteenth century, and in the closeness of "realities" and "perceived realities." Apparently, the Japanese leadership confronted a situation so completely apprehensible as the balancing of the interests of powers that they were not forced to develop a policy framework flexible enough to accommodate anything else. And that anything else? There are two--(irrational) race prejudice, and Chinese nationalism (pp. 29-32).

Before we follow this path of seeing Japan as rationally fitting itself to an internally stable system that could not withstand the irrationalities of the twentieth century in Europe or in Asia, we should remember that the Japanese state and Japanese nationalism (hardly mentioned by Iriye) were not stable, but expansionist. The Japanese state grew, (pursuing its interests in a context of big power diplomacy) incorporating Korea and parts of China. This inevitably provoked Chinese and Korean nationalism--issues that for Iriye did not fit within the "traditional precepts of diplomacy." Meiji expansion surely has something to do with the demise of big power diplomacy in Asia. Why was Japanese nationalism "congruent" with big power diplomacy, while Chinese and Korean nationalism were not? Was this only a question of timing? Is it possible that Korean nationalism was no less congruent with British imperialism than was Japanese?

If the pragmatic, non-ideological foreign policy still in some ways with us grew out of the Meiji Period, then the idea of economic interdependence so important in postwar Japanese policy arose from the 1920s attempt to participate in a new global order (p. 62). Iriye believes that Japan must now give up its passive adjustment to a disappearing environment and help to construct a new order, and he devotes a long section to the failure of 1920s Shidehara diplomacy. He proposes three possible reasons for this failure: Japanese militarism, the international environment, or problems with Shidehara's approach (p. 54). Iriye places great weight on the global economic crisis, the divergence of world "realities" from the conditions, including international order, necessary for economic diplomacy (p. 64). But, Iriye says Japanese militarism itself helped to destroy this system. He also argues that Shidehara's policy framework of economic interdependence could not deal with Chinese nationalism "at this time." In this sense, it could not be considered an advance over pragmatism. But, as Iriye describes it, Shidehara's policy did not always differ from the earlier pragmatic maintenance of privileges: He "was even willing to sacrifice international cooperation to achieve his ends." Therefore Shidehara diplomacy does not meet Iriye's policy criterion of a "purpose going beyond self-interest" (p. 188).

Apparently, in the environment of the 1930s, neither the policy of Shidehara nor the military could have worked, and after 1945, the military approach was impossible. Fortunately, a framework of economic interdependence allowed pragmatism after 1945, and Japan was able to pursue self-interest for more than four decades. Now, however, Iriye thinks, this period is ending, as did the first. Japan must, after a century and a half, think through a basis for foreign policy. Who is it that will?

Copyright (c) 1999 by H-Net, all rights reserved. This work may be copied for non-profit educational use if proper credit is given to the author and the list. For other permission, please contact H-Net@h-net.msu.edu

If there is additional discussion of this review, you may access it through the network, at: https://networks.h-net.org/h-japan.

Copyright © 1999 by H-Net, all rights reserved. H-Net permits the redistribution and reprinting of this work for nonprofit, educational purposes, with full and accurate attribution to the author, web location, date of publication, originating list, and H-Net: Humanities & Social Sciences Online. For any other proposed use, contact the Reviews editorial staff at hbooks@mail.h-net.org.