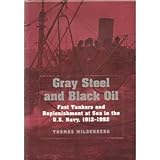 "Among military historians, amateurs study battles, but professionals study logistics," the truism goes, but we might update it to say that the best logistics historians contribute more to our understanding of warfare and society than simply another perspective on a particular conflict. When broadly interpreted and thoroughly researched, logistics history becomes a window to a society's perception of international events and its approaches to the practical problems of applying military force to them. With his monograph on U.S. naval underway replenishment in the twentieth century, Thomas Wildenberg has delved into the field of naval logistics, in the tradition of Worrall Reed Carter and Duncan Ballantine, to produce a study that reveals not only the particulars of naval supply procedures and equipment but also the economic evolution of American society.

Gray Steel and Black Oil actually addresses two principal themes. The first and more obvious is the evolution of the equipment and procedures for the refuelling of naval vessels at sea. The author is thorough in his chronological coverage of the subject, beginning with the first at-sea refuelling during World War I, the period of the first major U.S. naval activity of the petroleum age. Given the concurrent conversion of the fleet's boilers from coal- to oil-firing, development of underway replenishment was something more than an incremental advance in logistical efficiency; rather, it marked the dawn of an age in which naval mobility showed tremendous strategic potential. Though it would take a quarter century and another world war to have that potential realized, the seeds had nevertheless been planted with the efforts of the U.S. Navy in World War I, including the contributions of a promising young engineering officer by the name of Chester W. Nimitz.

Though important for its strategic implications, the technology of underway replenishment is the lesser half of the story Wildenberg has to tell. The second and more significant theme is the U.S. struggle to provide the squadrons of auxiliaries needed to keep the fleet fueled. World War I was the backdrop for America's first confrontation with what became one of the basic national security dilemmas of the industrial age: how to finance large expenditures for specialized military equipment that is indispensable in wartime but which has little or no peacetime value. Tankers can of course perform productive tasks in peacetime, but there is no need for the quantity of them required in wartime nor for the special installations needed to assist military operations.

The first American attempts to build a giant merchant marine were undertaken through the U.S. Shipping Board and the Emergency Fleet Corporation, with the Navy commandeering shipping needed for its operations into the Naval Overseas Transport Service. But the real problem arose with the return of peace, as the government endeavored to dispose of the suddenly unnecessary tankers and other expensive-maintenance merchantmen. The interwar years saw an intensification of the same predicament, especially in regard to tanker speed. It was simply too expensive for private shippers to contract for oil carriers that would be fast enough to operate with the battle fleet, and the navy itself could not afford to build or purchase enough such vessels, particularly after the onset of the Great Depression.

The answer proved to be a collaborative effort between the public and private sectors. The author provides a comprehensive account of the justly celebrated national defense tanker program, whereby the government provided subsidies to pay for the extra horsepower needed by commercial tankers so that they might serve as fleet oilers in wartime. It was an ingenious adaptation to the demands of warfare in the industrial age, and it helped to lay the foundation for the impressive American naval performance against the Japanese in World War II. Wildenberg rightly devotes considerable attention to the Pacific war, the shining moment of the fast tanker and at-sea refueling. In its combination of managerial inspiration and logistical creativity, the U.S. had found the formula for mastering naval warfare in the industrial age.

The end of the war brought further evolution to the concept of flexible logistical support at the hands of an armada of auxiliaries, which included not only oilers but tenders, hospital ships, floating drydocks, refrigerator ships, supply ships, and escort carriers. The navy combined the functions of these contrasting service vessel types into a single vessel, the "replenishment oiler." The first such auxiliary was the Kriegsmarine's Dithmarschen, awarded to the U.S. as part of Germany's reparations assessment. Tight budgets delayed the conversion of this vessel until 1953, so the proven method of multi-ship replenishment persisted through the Korean War. But the Dithmarschen concept eventually led to the "fast combat-support ship," joined in the 1960s by a smaller version for supporting anti-submarine carriers, a "jumboized" World War Two-era tanker with additional cargo capacity added for munitions and other supplies. Just as the numerically abundant auxiliaries of the World War II fleet had reflected America's mass production society of the industrial age, in the succeeding decades the U.S. Navy's trend toward fewer but more versatile ships, aircraft, and personnel mirrored the post-industrial tendencies of the nation at large. Gray Steel and Black Oil thus earns its place as another milestone in the historiography of military logistics.

To be sure, the volume is not flawless. There are a few typographical errors and jumbled dates, including one that is fifty years off (p. 147). A quotation used to bolster a discussion about U.S. Navy interest in expanding the merchant marine applies to warships rather than support vessels (p. 57), and there are conflicting figures given for naval aircraft sorties during the Korean War (p. 219). But listing such defects is more an exercise in nitpicking at the copy editing than assessing this monograph's historical merit. Perhaps a more substantive criticism is the lack of a broader historical context and interpetive framework for this topic, which results in an understatement of the historical value of the subject. It should be noted, even at the risk of appearing to fall into the traditional reviewers' snare of admonishing the author for not writing the book that the reviewer would have, this criticism springs from this reviewer's disappointment that Wildenberg hasn't permitted himself to explore the insights that his mastery of the subject and the source material might have engendered.

Nevertheless, serious students of twentieth century naval history or the history of logistics will want to give more than a passing glance to Gray Steel and Black Oil. In addition to the erudite text, the traditionally high production values of the Naval Institute Press and the numerous, well chosen illustrations make this a handsome volume, while the statistical appendices increase its utility as a reference work. Perhaps most of all, this volume and its freelance historian author serve to demonstrate that academic historians have no corner on the market for meaningful and well executed history.

If there is additional discussion of this review, you may access it through the network, at: https://networks.h-net.org/h-war.