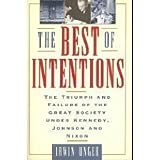 Since the early 1980s, the typical way to begin a book about the Great Society is to exhort with fists pounding that Americans have been "losing ground" since Johnson waged a War on Poverty. Another way to begin a book on the Great Society (less typical, though increasingly common) is to emphasize with feminist and racial concerns--a la Frances Fox Piven, Richard Cloward, and Linda Gordon--the post-Reagan attack on whatever gains the War on Poverty made for welfare rights and the amelioration of poverty. But Unger chooses the road less traveled. Unger's book about the Great Society begins by naming the good effects the Great Society had on the lives of the educated middle classes.

The Best of Intentions opens with Unger and his wife driving cross-country on a clean highway in a car fit with mandatory seat belts and collapsible steering columns, listening to classical music and "intelligent interviews" on National Public Radio (even from rural locations), stopping at "well-equipped public rest stops" (p. 9), and taking in some nature, such as they did at Assateague Island, in Virginia, a seashore preserve. "The Great Society of the 1960s has left its mark on the land," says Unger. But Unger's idea of "mark" is not what readers in the 1990s have come to expect. Says Unger: "The Great Society... made our trip pleasanter and safer (p. 9)." In other words, by contrast with Charles Murray's metaphor "losing ground," The Best of Intentions is positively cheery about the ground that America has gained with the Great Society. Unger is cheery not about the effects of welfare on the markets and morals of the poor (indeed, on this judgment Unger is relatively quiet). Instead, Unger celebrates the achievements of the Great Society which were designed with intent for the middle classes. It's not his only point.

Unger's emphasis on the worth of human beings who find themselves middle class is refreshing. The middle class, now that it has come into the view of historians after a hundred-year eclipse, is still ignored catholically in positive assessments of American culture. It's all "spectacle" and "gaze" at the fin-de-siecle. Thus it is notable, too, that Unger includes the values and the practices of the middle classes in the social welfare function when he evaluates the many programs of the Great Society--including the War on Poverty. Unfortunately, The Best of Intentions devotes little space to an articulation of the author's chief and boldest argument: that the programs of the Great Society which "worked best" were in fact the programs designed for the benefit of the educated middle classes (pp. 10, 366).

Unger devotes most of his formidable energies documenting the policy processes which gave rise to the big budget items of the Great Society: Medicare, federal aid to education, and the War on Poverty. Here, Unger is particularly strong in archival detail and in administrative scope, chasing Presidential and Congressional paper trails across the nation's depositories of oral history. Unger is also a patient teacher of the sometimes painful formulation and design of the Great Society programs--from VISTA to Head Start to the National Endowment for the Humanities.

The main problem with the book as policy history is that Unger engages in an unarticulated rhetoric of economic and policy performance. It is difficult to discern what standards are being used by Unger to evaluate the programs that "work best." For example, Unger seems to write without irony: "The Economic Opportunity Act was sound, [Sargent] Shriver told the legislators; the country would get a dollar's value for a dollar spent (p. 86)." That expected rate-of-return, it seems to Shriver and to Unger, represented what Shriver called "the best thinking in the nation on this subject (p. 86)." According to Unger, the Economic Opportunity Act "sought to change the poor... The proposed bill provided modest amounts of seed money to enable the poor to acquire the skills, motivation, and attitudes they needed to better cope with the existing economic rules of the game (p. 86)." Unger's main criticism of the bill is for its failure to promise a massive transfer of income to the nation's poor. The point here is that Unger does not consider his own standards for how any policy could "work best:" Sargent Shriver's standard for investment, the textbook government rule of TR=TC, does not--despite the intention to build skills among the poor--promise growth in GDP. It is not clear in this chapter or in others for what purposes a simple, massive transfer of income to the poor--if politically feasible--would "work" well for both taxpayers and recipients.

Unger is not alone, of course, in being ambiguous about performance standards in economic policy. The work is not cliometric: it is an older style of policy history, pre-cliometric, pre-critical theory. But a stated commitment to quantification or theory would not alone be sufficient for improving Unger's policy analysis. (Witness the abuse of tests of statistical significance, even in the top journals of economics.) What Unger is reaching for but not attaining is a language for valuing improvements in the "quality," not merely the "quantity," of life. Unger credits Johnson's speech-writer, the Harvard-educated Richard Goodwin, for putting a quality-of-life agenda in the mind of Johnson (p. 17). But Unger himself has not decided how to evaluate quality of life as a policy variable or as a way of being. Unger's use of the term "quality of life" is reserved for the middle classes--for Johnson's middle class intellectuals, who seem to inspire Unger, the quality-of-life agenda was about getting more "Athens" and "Florence" and less sprawl of kitsch and spiritless suburbia (p. 17). In The Best of Intentions, "quality of life" does not seem to be an object of concern when evaluating policy directed at those who lack severely in the quantity" of life. In fact in the epilogue Unger leans against the project of making quality distinctions altogether, yielding ground to the neoclassical economic (or philosophical emotivist) idea that there is no arguing about tastes. Here, Unger suggests that if Americans want to buy more Heater Meals and less health care--and GDP is growing--so be it (p. 364). Yet Unger's main point is that Americans ought to discriminate quality from quantity, and that was the good of the Great Society. Americans should want less Kenny G in the elevators and more symphony in the city parks, so be it.

Says Unger, "[on] the whole I believe the top-down view more persuasive" (p. 50). "The top-down perspective identifies anti-poverty initiatives as the work of liberal technocrats in the Kennedy-Johnson White House" and of other "top layer" bureaucrats and academics (p. 50). In Unger's story of movements for reform in the 1960s, the credit goes to the likes of Daniel Patrick Moynihan, the economists Walter Heller and Robert Lampman, the speech-writer Richard Goodwin, the HEW's Alice Rivlin. There can be no doubt that these and many other "liberal technocrats" did the thinking and the policy-writing for the War on Poverty. But Unger, using his own words, seems to force the conclusion that "America's social essence" in the 1960s was one in which reform could have only come from the top; or, perhaps, though less likely, Unger is concluding that the top is simply the proper location for reform.

Yet it is plausible to think that Unger's conclusion has been forced not by his preferred model of America's social essence. Unger's conclusion that the reforms of the 1960s were top-down may be forced by his preferred model of American social science. The way Unger views the material of history is itself top-down. Unger is not a builder of rational-choice models but he borrows its top-down, policy-driven, and behaviorist rhetorics. Unger is an empiricist but he examines the movements of the Sixties--community action programs, "ghetto unrest," the theater of Baraka--through the lens of journalists, top-layer bureaucrats, and liberal technocrats. In other words, Unger does not examine the rise of anti-poverty initiatives by examining first-person stories and micro-level practices of the nation's welfare recipients, welfare rights activists, local bureaucrats, and so forth. Unger does not examine the ways in which local inspirations--even neighborhood events--might have gathered steam from other localities, shaping from the bottom-up what look to be a passing storm of "federal initiatives." The top-down model of America's social science is shaping the top-down understanding of America's social essence.

The general weakness or absence of an explicit theoretical or critical posture is what will turn many readers away from The Best of Intentions. The Great Society made its mark on the land, but there were apparently no women involved. (The author is explicit in his omission of race and of civil rights [p. 10].) For this reader, Unger's archival treasures are material for testing important critical work on economic policy, such as that which is to be found in Albert Hirschman's The Rhetoric of Reaction (Cambridge: Belknap Press, 1991) and in Robert Higgs' Crisis and Leviathan (New York: Oxford University Press, 1987). Hirshman's "jeopardy thesis" needs Higgs' "ratchet effect," and the fusion would surely illuminate The Best of Intentions. Unger is at his best when his verbal analysis of post-program achievements is tightly woven with a narrative of program intentions: this is easily witnessed in Unger's excellent summary of the Job Corps (p. 178). The Best of Intentions is at its worst when it attempts to characterize the behind-the-scenes lives of Presidents Kennedy, Johnson, and Nixon, sounding at times more like an Arts and Entertainment column than a history with an ear to morals and manners.

But if Unger has not opened the conversation he has surely--in his emphasis on the middle class--made an important contribution to the way in which historians will view the triumphs and the failures of the Great Society. The middle class matters. Thanks to Unger's work, observers of the Great Society will be challenged to add to the balance sheet a Sesame Street and a theater and a well-equipped rest area for each ill-conceived community action program and long-term welfare case.

Copyright (c) 1998 by EH.NET and H-Net. All rights reserved. This work may be copied for non-profit educational uses if proper credit is given to the author and the list. For other permission, please contact the EH.NET Administrator. (administrator@eh.net; Telephone: 513-529-2850; Fax: 513-529-3308)

If there is additional discussion of this review, you may access it through the network, at: http://eh.net/.

Citation: Stephen Ziliak. Review of Unger, Irwin, The Best of Intentions: The Triumph and Failure of the Great Society Under Kennedy, Johnson, and Nixon. EH.Net, H-Net Reviews. October, 1998.
URL: http://www.h-net.org/reviews/showrev.php?id=2437

Copyright © 1998, EH.Net and H-Net, all rights reserved. This work may be copied for non-profit educational use if proper credit is given to the author and the list. For other permission questions, please contact the EH.NET Administrator (administrator@eh.net; Telephone: 513-529-2850; Fax: 513-529-3309). Published by EH.NET.