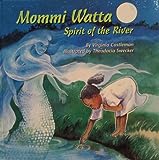 Magic from an African River: Is Education Only a Dream for Girls in Africa?

This beautifully illustrated children's book and its magical story will appeal to children of all ages. This little book is also of interest to the serious student of African culture because Mommi Watta is recognized by diverse people in nearly all West African countries, where she has different local names, and where the English adaptation of her name is spelled in many different ways, e.g. Mammywater, Mami Wata, Mammy Water etc. This children's book also calls to mind an earlier children's book, Mammywater, by the late Nigerian author, Flora Nwapa (1978), the Mami Wata poster used by African herbalists throughout West Africa, and the area's many popular musicians addressing Mami Wata in their songs, e.g. Nigeria's Victor Uwaifo in "If You See Mami Wata."

Mommi Watta, Spirit of the River is an adaptation of a story told by the Kpelle people of Liberia. Despite the story's local base, Mommi Watta's African name is not mentioned. The human protagonists, on the other hand, do have African names, e.g. Sowa and Pawyon. Some Kpelle and pidgin English words are mentioned and explained.

Sowa is the book's central character. The little girl and her family live in an African village near a river. Children of both sexes help their respective same sex parent. But while her brother Pawyon rests and plays with their father, Sowa must still do the family's laundry. While her brother goes to school, her labor is needed back home. The little girl, Sowa, dreams of going to school. She also dreams of Mommi Watta. In her dreams, Mommi Watta offers to help Sowa to fulfill her wish and enable her go to school--but at a price: If Sowa accepts Mommi Watta's precious offer to change her destiny, then Mommi Watta would in turn take something precious from Sowa, namely her brother Pawyon. He would then have to join Mommi Watta in her watery domain and leave his life on earth behind, as soon as Sowa would look at him. When Sowa wakes up and finds in her hands the precious ring she had previously seen in the river, she is terrified. She blindfolds herself to avoid seeing Peyowa and contemplates tricking the spirit to give without taking. This, her old mother tells her, is impossible. Sowa finally throws the ring back into the water and refuses the spirit's gift for fear of destroying what is dear to her.

On one level, the book introduces American children to another world, and to the lives of children who live in Africa, on a different continent, in a different country and culture. On another level, the book's universal theme addresses much broader issues of gender. These issues transcend geographic and cultural peculiarities. The question of a girl child's education and of whether women's place is in the work force, or at home, is a universal one, even though it may be addressed and resolved differently in different societies. Beyond the question of education, women of all countries and ethnic groups have to come to grips with the dichotomy between their personal career and the raising of children. In this sense, Mommi Watta, the water spirit who offers woman personal advancement is a universal theme that can be discussed with young readers independently of geographic location.

There is an added dimension to the Mammy Water theme: its underlying belief system, imagery, and ritual practice. This is evidenced in the academic discourse and controversies that have arisen around the subject of Mammy Water since 1970. Throughout West Africa, local people identify Mammy Water with their different localized water deities and say that they use the Pidgin English term primarily to communicate with non-locals. Several African artists (Twins 77) and authors (Nwapa) take the position that Mammy Water is merely an English term for an African Divinity. According to Mrs. Chinwe Achebe, the wife of Mr. Chinua Achebe (1987), Mammy Water's generic Igbo name is "Nne Mmiri". She is the supreme Water Goddess in Igbo cosmology. Foreign academics, on the other hand, have attempted to appropriate this spirit, her imagery and rites for themselves, or their Western culture, regarding Mammy Water as primarily a reaction to the European impact on African cultures. They have reiterated the Freudian idea that the Mammy Water icon, a woman with snakes, signals mental derangement and symbolizes oedipal desires (Wintrob, 1970), that this image is primarily an imitation of one particular European poster and thus represents an imported "cult" (Salmons 1977), that this "cult" represents unfullfilled desires for European/Western women, goods, and wealth (Fabian 1978), that this is "a new world being" introduced to Africa from the Caribbean (Paxson 1980, Chesi 1981) and is ultimately a celebration of the Other/ European (Drewal 1977, 79, 80, Kramer 1983, Jenkins 1984, Wendl/Wiese 1988). Other scholars have strongly renounced the idea of "Mammy Water as a foreign import" (Biaya) and have instead either emphazised the importance of agency for the analysis of Mammy Water rites (Nevadomsky), or argued that interpretations of Mammy Water beliefs, imagery and rites cannot be separated from the view of local adherents because Mammy Water is an intrinsic part of African spirituality, religious beliefs and myths where this water deity occupies an important position and has different local names (Jell-Bahlsen 1989, 97, 98).

While the academic discourse about Mammy Water's origins and character may be harmless, its ideological derivatives are more dangerous. In part because of her association with female fertility, the Water Goddesses is amongst the most sacred divinities in various African belief systems. This belief in the revered Mother strongly competes with Christian messages. As a result, churches of various denominations argue strongly against local beliefs in the Mother Water Goddess as savior, e.g. in Oguta right after the Nigerian civil when the villagers wanted to thank the Goddess Ogbuide of Oguta Lake who is also known as Mammy Water for their rescue (Nwapa, Jell-Bahlsen 1989). In one violent attack on a Water Goddess temple, two life-size seated shrine sculptures for the River Goddess Ava were beheaded by fanatic Christians at Ukana near Nsukka in 1992, and there are many more stories of destructions of local shrines, harassment of priests and priestesses, and of burnings African art objects that are associated with non-Christian religious beliefs and practices. Yet, as if this was not enough, various churches also spread vicious allegations particularely against the female river spirit, in their attempt to discredit the child- and wealth-giving Mother Water Goddess. Church leaders charge that Mammy Water, "takes away children", or "kills babies." These charges were at the root of a mermaid scare stampede in an Enugu school, where five schoolchildren were trampeled to death in 1985. The Catholic church's vicious allegations of "sacrificing babies," "killing children" etc. against the adherents of other religions are historically well-known and documented, e.g. in allegations made against practitioners of the Haitian Vodun religion and, also, against Judaism in a doctrine that was recanted by the pope only as late as in the 1960s.

A children's book, Mommi Watta, Spirit of the River stays clear of the academic discourse. Mommi Watta's whiteness is the color of a spririt rather than a racial feature. She is a spirit clearly rooted in her African environment. Luckily, the authors also avoid Christian messages that overemphazise the water spirit's scary aspect. An African water goddess, Mommi Watter is truly awesome. She is complex, and she can give and take. The wisdom of African cosmology teaches important lessons that can be explored when discussing the book with young readers: we may have to pay a price, e.g. work hard, for desires to be granted. Women are facing more challenges than men, when seeking personal advancement because they may be forced to chose between a family, children and a career. While all of these issues are important, they need to be addressed and discussed with the young reader. The book is definitely more than merely cute entertainment. Reading Mommi Watter raises questions that require guidance from a parent or teacher. With guidance, the book awards an excellent opportunity to explore questions of ethnicity, culture, gender, education, work, family, and love.

If there is additional discussion of this review, you may access it through the network, at: https://networks.h-net.org/h-afrlitcine.