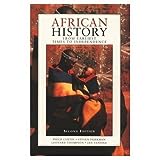 African historians welcomed the first edition of this book, published in 1978 by four of Africa's most distinguished historians, as a study "bound to remain the standard text on African history for many years."[1] Those predictions proved prescient, and African History has been used for many introductory courses. The authors have now revised their original edition and produced this work. Even though the revisions are not very extensive, this volume is still a book that historians will want to use in introductory courses, especially those that cover the continent's entire history in one term.

Much of the book's continued utility is a legacy from the original volume's strengths, which stemmed from the authors' many years of accumulated wisdom, and even today the insights provided in the chapters remain vital. In particular, Philip Curtin's integration of Africa's past into other historical experiences is useful for debunking the myth of an isolated continent. And his dissection of African influences on Mediterranean societies is bound to be useful for historians confronted by students strongly influenced by Afrocentricism.

Curtin is not the only notable contributor, of course; both Steven Feierman and Jan Vansina provide chapters that brightly illuminate the precolonial histories of the different regions in which they specialize. And both authors have incorporated some notable revisions that make the book more contemporary. For instance, Vansina has muted his earlier assertion that "a kingdom was more complex than a chiefdom" (1st ed., p. 20). And Feierman has shed much of his long discussion of "a lineage as a whole" (1st ed., p. 158) The corrections incorporated by these two authors are not always perfect; the editing of Vansina's discussion of race in chapter one simplifies the issue almost too much. But in general, both authors have improved their contributions.

Only Leonard Thompson's discussions of southern African history remain disappointing. Even though his compatriots focus on African societies, Thompson expends enormous amounts of time discussing both the Portuguese and Afrikaners. No one disputes the importance of these groups in southern Africa. But it is hard to escape the fact that enormous strides have been made in our understanding of indigenous communities in southern Africa since 1978. But, though Thompson acknowledges the contributions of scholars like David Beach, it is often difficult to see how their work has been integrated into the text.

Each chapter has a short bibliography at its end that provides a useful guide for students interested in pursuing covered topics. Historians will undoubtedly find what they consider to be deficiencies in these lists; for instance, it is interesting to note the exclusion of the recent literature on Mau-Mau, even though Nottingham and Rosberg are included.[2] But in general, the suggested readings include many of the most important studies done in the last seventeen years, as well as significant older texts.

The book has other flaws as well. The need to condense so much history into a five-hundred-page volume has caused the authors to sacrifice detail. For instance, it is hard to reconcile John Chilembwe's meriting only one sentence in the text. Indeed, those interested in using the book as a source of detailed factual information will unquestionably be disappointed. This is, as the authors themselves assert, a book of themes and patterns. The obvious presumption is that lectures and supplemental readings can provide the kind of factual minutia missing from its pages. Those who seek a more event-oriented text should probably look elsewhere.

There are other problems that existed in the first edition. One of the most notable is the relative absence of methodological discussion. The authors do not entirely exclude methodological concerns from their text. For instance, Vansina discusses the importance of both archaeology and linguistics in any attempt to understand the diffusion of iron and peoples in Africa south of the Sahara. Feierman has some interesting discussions of oral tradition and Chwezi heroes. But it is astonishing to note that a book by these authors can fail to discuss oral tradition until well into chapter four. Part of the reason for this omission undoubtedly stems from the authors' determination to "outline what we believe to be the most credible reconstruction" of Africa's past (p. 242). But one cannot help but wonder whether examining the process of reconstruction may not shed as much light on the past as a synthesis of the evidence does.

Moreover, the exploration of alternative sources has always been one of African history's greatest strengths. Not only have African historians "legitimized" the use of oral sources, but work in areas like environmental history has shown scholars useful, new ways to examine the past. Moreover, even with more traditional sources, African history has demonstrated the pitfalls and dangers of historical reconstruction. Leaving those lessons out in some ways reduces the importance of African history by neglecting how oppressed or marginalized people simply disappear from the collective past.

Another problem that the authors neglect to tackle involves the legacy of colonialism. Despite their protest that they "give more attention to the pre-colonial century," the authors spend a quarter of their book discussing colonialism (p. xv). Yet, despite this scrutiny, there is little discussion about the impact of that experience. In an era in which African nations are still struggling to achieve economic prosperity and political stability, such an omission may be irresponsible. Since conventional wisdom agrees that many of Africa's contemporary difficulties were either nurtured or rooted in the colonial experience, it would be useful to understand how those problems evolved. Of course, the book never discusses post-colonial Africa, so such a lapse is not a problem in its narrative.

Ironically, the lacunae bring up a philosophical question about the authors' intent. When virtually all of the authors began their careers, studying Africa needed justifying. Most scholars argued that Africa had little or no history before Europeans arrived, and the history that did exist was often relegated to the realm of barbaric agitation. Fortunately, the authors and their contemporary colleagues did much to repudiate these racist ideas with the studies they produced. But it is hard to escape the feeling that this book continues a legacy of proving that Africans had as important and viable a history as other peoples of the world.

That was and remains a laudable contribution to scholarship. Those of us who teach at schools with no other Africanists are reminded on an almost daily basis of how many myths and misconceptions persist about Africa. On the other hand, African history and contemporary scholarship have matured enough to go beyond simply correcting past inaccuracies. Instead, the momentum of scholarship almost dictates that historians try not to recreate an African history that only debunks the racism of the past but instead attempt to recreate an African past in line with the experiences of its people.

Raising this issue illustrates an interesting flaw in African History. Curtin himself, who wrote half of the chapters, concludes his discussion of stateless societies by noting that "as many as a quarter of all the people in West Africa belonged to stateless societies at the beginning of the colonial period." He then notes that the absence of records from these societies means that "historians of earlier periods simply have to leave them out" of any histories that they produce (p. 71). In the same way, Vansina argues that political development in Equatorial Africa revolved around "various political units within a discrete area--houses, villages and districts in most places (p. 221). But the book itself does not tell us about what happens to those "houses, villages and districts" through time even though they are recognized to be the central feature of society.

Nor do the authors talk much about the ideological and epistemological elements that held this world together. Thompson mentions the importance of initiation societies in southern Africa and points out that "the initiation schools transmitted from generation to generation a world view that included spiritual as well as material elements (p. 249). But having told his readers this, Thompson lets the initiation schools, like the "houses, villages and districts," disappear from view. Yet, in an era in which philosophers like V. Y. Mudimbe address issues like African gnosis, one wonders whether historians can afford to neglect institutions such as these.[3]

In the end, of course, it is unfair to criticize the authors too much for what they did not do. Specialists in each area of Africa are grappling with these very issues all the time, and topics like epistemology remain very controversial. At the same time, it is hard to escape the nagging feeling that many of Africa's unique features emerged from institutions that do not fit into the traditional Western historical narratives. In other words, the long-cherished tradition of trade and politics may be far less important than religion and ritual for those interested in reconstructing the African past.

The issue here is whether a "new" African history is in fact emerging. If so, this book does not significantly address many of its central themes and features. Still, it is an admirable synthesis of the established school, which in many ways created African history as a field and which allowed new generations to explore other questions. Until those examinations produce more answers and insights, African History should still be assigned and read.

[2] For instance, it would have been useful to include Frank Furedi, The Mau Mau War in Perspective (Athens, 1989).

Copyright (c) 1996 by H-Net, all rights reserved. This work may be copied for non-profit educational use if proper credit is given to the author and the list. For other permission, please contact H-Net@H-Net.MSU.EDU.

If there is additional discussion of this review, you may access it through the network, at: https://networks.h-net.org/h-africa.

Copyright © 1995 by H-Net, all rights reserved. H-Net permits the redistribution and reprinting of this work for nonprofit, educational purposes, with full and accurate attribution to the author, web location, date of publication, originating list, and H-Net: Humanities & Social Sciences Online. For any other proposed use, contact the Reviews editorial staff at hbooks@mail.h-net.org.