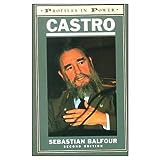 Castro thus stepped into a power vacuum that was not entirely of his making. He had skillfully seized the opportunities offered by a conjunction of historical conditions that were unique to Cuba. His success, moreover, owed much to his imaginative use of the mass media as to the guerilla campaign.. . . By 1959 Castro had become the repository of many disparate hopes for Cuba's regeneration. As he had made his slow triumphal way by road from Santiago to Havana, he was treated as the last in the long line of Cuban heroes - the last, because, unlike the others, he had survived and prevailed.

In this quote, Sebastian Balfour summarizes Castro's rise to power and the major emphasis of the book: "the interaction between Castro's special qualities as a political leader (including his capacity to survive disaster through luck and determination) and the historical conditions that he and his supporters encountered and worked on"(4). Balfour carefully intertwines the history of Cuba and its place in the world and Castro's rise to power to explain the endurance of Castro's power and of the Cuban revolution itself.

Balfour challenges many notions about Castro's rise to power and his ability to remain supreme leader of Cuba. He argues that Castro was not marxist as he led the Moncada incident, nor was he marxist as he led the resistance in the Sierra Maestra in Orient province. He looks into the mind of Castro through available interviews, Cuban press, eyewitness accounts and English and Spanish resources, to learn what drove the man. His conclusions differ from right- and left-wing histories which claim their own respective truths, according to their political motivations. Even Castro himself has fed into the myth of his leadership by contending in his later years that marxism drove his early intentions to help his country escape the hands of the imperialists. But history, Balfour contends, tells a different story. And, Balfour convincingly asserts, Castro led the revolution out of impatience, not out of a thirst for power.

Castro's control and power continue even today, making him the longest-standing revolutionary leader in Latin America. His ability to persevere as leader of Cuba continues to astonish and distress the United States. Balfour contends that the survivability of Castro is rooted deeply in the history and traditions of Cuban society, and is tied directly to the attempts by the United States to destroy his regime and image. How did Castro become so powerful? A look into the past, Balfour capably argues, is warranted.

The revolutionary ideal set forth by Castro was independence from imperialist. His movement toward communism originally was due, as Balfour convincingly argues, to its organized support for change. Also, Castro's two closest advisors, Che Guevara and his brother Raul Castro, were unorthodox communists. Most importantly, however, he began to see that communism was the answer for the economic injustices within Cuba. Castro carefully adapted communist ideals to fit Cuban realities, in a sense creating a sort of Cuban nationalist socialism.

Balfour organized the book chronologically, beginning with a short history of the struggle for Cuban independence as early as 1868. With a discussion of the student movement of 1923 and the events of 1933, he illustrates the importance of independence from imperialism as a driving force in the future success of the revolution and Castro in particular. Castro latches onto these events as symbols of his struggle for the independence of Cuba--which become his motivating force throughout his career. This theme of independence from foreign domination, be it political, economic or social, continues to surface as his rallying cry. Independence from colonial rule and from the heavy hand of United States imperialism are engrained in Cuban psyches, and Castro claimed this concept as his own--utilizing historical precedence to accelerate economic and social programs during the 1960s.

As the 1960s drew to a close, the economy began to suffer and even Castro began to call into question the road of the revolution. He publicly criticized the methods his administration had chosen to enhance the revolutionary process and called for changes on all levels of government, economics and even Cuban work habits. Habitual absenteeism was no longer acceptable. He called for sacrifice and austerity. No longer would access to health care and education quiet the people. Changes had to be made. Although the author did not discuss Castro's decision to admit failure, on can imagine that only a ruler secure in his position, but feeling the pinch of failed policies and the need for change, could come out a hero after such a revelation. Reevaluation and change proved to be the key to Castro's ability to hold onto the reins of power. More discussion about Castro's mastery to adapt to change and incorporate change to his benefit would illustrate more clearly to the reader the awesome power and sense of responsibility of the man.

The 1970s were not easy years for Castro nor for Cuban nationalism: dependence upon the Soviet Union and crises at home and abroad. Castro, nevertheless, found a way to make these events work to his advantage. He became less involved in internal matters and with great skill became a statesman extraordinaire, his greatest success being Angola. Castro's determination and success forced the Soviets and the United States to look at Cuba with greater respect. But the 1970s ended with more troubles on the international scene, as well as domestically.

The 1980s were a difficult time for communist regimes. By the end of the decade, many had fallen. Castro was not disheartened, however, and instead pointed to their errors in judgement as being the Achilles heel of the failed regimes: glastnost, perestroika, and elections in Nicaragua. In order to maintain control, Cuba had to stick to her ideals of a Cuban-styled socialism. A socialism based in nationalism, not international communism, and one formed by the unique historical truths of Cuba. Castro adapted himself, socialism, and political authority to fit changing conditions in Cuba through the thirty-plus years of his leadership.

Not an implicit argument by any means, but one that invariably surfaces throughout the book, is that of Castro's ability to adapt to changing circumstances within Cuba and in view of changes both internally and externally. Besides understanding how to play off the Soviets against the Americans, Balfour carefully illustrates how Castro meticulously adapted his administrative style, mode of dress, activities and travels within and outside of Cuba, in order for his revolution to survive in a changing world. In fact, although Balfour does not state it outright, Castro's adaptability has in fact saved the Cuban revolution and his own leadership.

Although the book is written as an introduction to students and non-specialists, many veterans of Cuban history will find this a refreshing history of this fascinating era. Carefully written, this book attempts to look at the political life of Castro through non-partisan eyes, as much as that is possible. It is not a condemnation of his policies and authoritarianism as marxist or communist, nor is it a story of the brilliance of leftist leadership. Rather, it is a fairly well-balanced piece of research that both criticizes and commends Castro's regime and policies.

Another strength of Castro's is his ability to utilize internal and external tension and conflict to his own advantage. The author gives many clear examples of this throughout the book, but the most recent is the discussion about the Latin American debt crisis. Although Cuba is not in the same position as many other Latin American countries, Castro utilizes the concept of debt to First World Countries, primarily the United States, as a rallying cry against imperialism from abroad and the need for hemispheric nationalism.

Balfour's well-organized and coherent look at Castro's life and the revolution is concise and well-argued. His paucity of photographs, diagrams, or maps will hinder those without much background in Cuba, Castro, or the Revolution. To understand a person and their connection with place and event, photographic evidence often leaves a striking impression on the reader. As Balfour followed Castro's life through the years, describing changes physically and in dress, photographs would have been visually convincing (especially one of the pigeon landing on him during his famous speech). Readers more interested in social aspects of the revolution would appreciate diagrams or maps which assist the reader in visualizing battles, strategic areas within Cuba, and key agricultural sectors. Although Balfour does include two maps, albeit not well placed, they are not overly helpful.

One item I wish Balfour would have expanded upon that he mentioned briefly at the outset, is the critical importance of religion, spirituality and mythology in his charismatic presence for the people. He mentions the "pigeon incident," but never explains its significance mythologically. To newcomers in Latin American or Cuban history, this incident might seem unimportant, but in fact events like these helped shape the myth of the man.

His bibliographic essay is most helpful in illuminating resources, both in English and Spanish. He brings to light their limitations, as well as their political agendas. The fact that he uses sources from both spectrums, as well as his style of narrative, indicates that he has attempted to tell the story of Castro and the Cuban revolution in non-partisan terms. I would argue he did this very well.

Balfour admits to many problems in attempting this book. Sources are not readily available about Castro's early life, analyzing political events is problematic from outside (and inside), and Castro is not one prone to talk about the intimacies of his life. Nevertheless, Balfour argues that the book was necessary because there is a real dearth of analytical information about this important leader. Most importantly, this book is a "reinterpretation in light of recent investigation" (vi). A much needed addition, I might add.

Castro, part of the Profiles in Power series edited by Keith Robbins (University of Wales, Lampeter), should be considered for use in Latin American introductory courses, as well as a source for discussion in seminars on Latin American leaders and revolutions. Balfour begins to tear away at the popularly understood myth, partially instigated by Castro himself, that communist and marxist ideology was the driving force behind his actions from his beginnings as a law student and student leader. Mostly, I heartily recommend this book because of the ability of Balfour to convey Castro's ability to deal with a changing world--even into 1994, as the book was going to press.

And Castro continues to survive.

Copyright (c) 1995 by H-Net, all rights reserved. This work may be copied for non-profit educational use if proper credit is given to the author and the list. For other permission, please contact reviews@h-net.msu.edu.

If there is additional discussion of this review, you may access it through the network, at: https://networks.h-net.org/h-latam.

Copyright © 1995 by H-Net, all rights reserved. H-Net permits the redistribution and reprinting of this work for nonprofit, educational purposes, with full and accurate attribution to the author, web location, date of publication, originating list, and H-Net: Humanities & Social Sciences Online. For any other proposed use, contact the Reviews editorial staff at hbooks@mail.h-net.org.