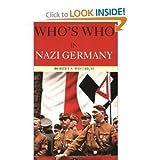 Reviewed by Tim Kirk (University of Northumbria at Newcastle)
Published on H-German (October, 1997)

This is a second edition of Robert Wistrich's Who's Who, and most students, teachers, researchers and general readers interested in the Nazi dictatorship will no doubt have come across the first edition, which was published in 1982. This one is not substantially different. There are some 350 biographies of leading figures in Nazi Germany, including senior officers in the armed forces, industrialists, academics, clergymen and creative artists as well as members of the Nazi party and its affiliated organisations. Many who fled Nazi Germany are also included. There are a handful of additional entries in the new edition, and earlier inaccuracies in some have been corrected. Other slips remain. Heydrich, for example, is referred to as a "Gestapo chief," albeit not in his own biography but that of Wilhelm Canaris (p. 29). Others entries have been updated, an exercise which now principally involves recording deaths of the last surviving members of a generation. And more deaths will no doubt have occurred since the revised manuscript was delivered (Artur Axmann's for example, in 1996).

The individual biographies collected here are for the most part those of establishment figures of the 1930s and 1940s. Taken together they more or less constitute the ruling class of the Third Reich. Most of the people here were members of the Nazi dictatorship or "regime" in the broadest sense, something which was always much broader than a "one-party state," still less the personal rule of an "evil" dictator and his henchmen. The regime encompassed supporters, sympathisers, and formal coalition partners among adherents of the conservative and nationalist parties, economic overlords and exploiters of slave labour, senior policemen and army officers, technocrats and planners. Between the narrow focus on Hitler and his "programme" on the one hand, and the broader focus on the historical psephology of the Depression on the other, much less attention has been paid to the senior personnel of the Nazi dictatorship as a ruling class.

A number of features will strike the casual reader approaching the collection. Firstly, and notwithstanding the lowly-born little Hitlers who rose through the ranks of the party and other Nazi organisations, most of the Third Reich's ruling class were overwhelmingly from rather well-heeled backgrounds. There are virtually no women among the Who's Who. Eva Braun is here, of course, along with a some very well known public figures (Leni Riefenstahl) as well as women who, unusually, occupied important positions in the hierarchy of the regime (Gertud Scholtz-Klink) and famous representative figures from the Weimar Republic (Kathe Kollwitz). And since the author records meticulously what happened after 1945, we are reminded of the extraordinary leniency shown to those who were called to account. Gunter D'Alquen, SS arch-propagandist, was merely fined and, according to Wistrich's information, lives on to this day. Walther Darre, a Nazi minister, was sentenced to a mere five years' imprisonment. Nikolaus von Falkenhorst, meanwhile, the Commander-in-Chief of German troops in Norway who handed over prisoners of war for execution, received a death sentence from a British military tribunal in 1946, a sentence which was later commuted to twenty years' imprisonment so that he was released in 1953 on health grounds. He died in 1968 at the age of 83. Similarly, Walther Funk, the Nazi economics minister, was released for health reasons after serving only half of his twenty-year sentence. Erich Koch, the Gauleiter of East Prussia and Reich Commissar of the Ukraine, escaped execution in Poland in 1959 because he was bed-ridden, and died in prison in 1986 at the age of 90. Karl Wolff, a senior SS officer who was accused of sending at least 300,000 Jews to Treblinka and of complicity in the shooting of partisans and Jews in Belarus, was sentenced to fifteen years' penal servitude after he was arrested in 1962. He too was released early, on account of his "otherwise blameless life" and lived to be 84. Similarly General von Falkenhausen, the military governor of Belgium and northern France, was convicted by a Belgian court of ordering the execution of hostages and the deportation of Belgian Jews and sentenced to twelve years imprisonment, but this sentence was commuted to three weeks because "he had also protected Belgians from the SS." Friedrich Flick "employed" some 48,000 slave laborers during the war, the overwhelming majority of whom died; yet he avoided paying compensation to the few survivors and bequeathed over a billion dollars to his son when he died at the age of 89.

Copyright (c) 1997 by H-Net, all rights reserved. This work may be copied for non-profit educational use if proper credit is given to the author and the list. For other permission, please contact H-Net@h-net.msu.edu.

If there is additional discussion of this review, you may access it through the network, at: https://networks.h-net.org/h-german.