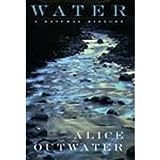 Water: An Attempt to Make a Cloudy Past Crystal Clear

Water, as most of us know, has played a vital role in the history of the world; it is essential for sustaining life. Either in ubiquity or scarcity, water maintains a controlling force over the course of human events. If there is too much, flood control is a paramount concern; if there is too little, then damming and storing what little water does flow becomes a pressing concern. The central role that water plays in human history, indeed in natural history, too, is the subject of a vast body of literature. Naturally enough, the control of water, the quality of water, and its presence or absence, is a field of study that piques the minds of many. Water, and the channels through which it flows, have in some measure, always been controlled spaces. Whether by beaver dams or human dams, waterways are some of our most manipulated geography. The very nature of water makes it malleable. And all species^Ò direct reliance on it for survival insures that it will, indeed, be manipulated.

Water: A Natural History attempts to do no less than give a total history of water and the ways in which it has been managed, or mismanaged, in the United States (The brief history of the fur trade crosses the border into Canada, however.) Ms. Outwater has taken on a gargantuan task; the history of water in America is, vastly understated, complex. In fact, too complex to tell in a mere 186 pages of text. In such a brief account one can only expect the barest outline of the story. And that is what one gets. The book knows no geographical boundaries; it picks examples of water history from the most disparate of regions and gives the reader only an inkling of the rich and murky history of water. This can be a burden or a benefit. That is, if one is moderately well versed in water use history and the ecology of water, then I suspect there will be little new here. On the other hand, if one is looking for a brief and easily digestible book written in accessible prose, then maybe this one will do as an introduction to the subject. It should be noted, in fairness, that _Water: A Natural History is not an academic title. Rather it falls into the abyss of the crossover book; it frustrates those knowledgeable about the topic, but probably will enlighten those who are not.

The book has two stories to tell. First, is the fairy tale of beavers and buffaloes and Indians allowing the natural course of water to go unmolested in a millennia long rhythm of purity, from its fall from the sky as rain to its journey down waterways and into groundwater stores and its eventual flow to the sea and then back to the sky to begin the cycle anew. Second, Ms. Outwater spins the cautionary tale of how Euroamericans, after the old Indian lifeway was destroyed, have disrupted this concatenation that had developed seamlessly between animals, Indians, and water. They are, of course, two diametrically opposed stories. The implication of the first is that if Columbus hadn't landed on the shores of America the cycle would have gone on indefinitely, and the gist of the second is that if we do not find that lost world then we are doomed. I am painting broad strokes across this book because it does the same to the history of water in America.

Water: A Natural History is divided into two parts: Dismantling the Natural System and Engineering the Waterways. In the first section natural systems, such as the beaver^Òs manipulation of stream flow, are juxtaposed with the decidedly unnatural histories of events such as the fur trade. Again, in the chapters, Sea of Grass and Plowing the Plains, the beauty of natural systems is contrasted with the evils of human use of the land. It is a story of good and bad played out against one another.

Water, at times, is only the loosest bond between these stories. For example, in the The Woods Outwater relates the history of the destruction of the vast timber stores of United States and how the waterways were the worse for it. As Outwater acknowledges, the relationship between siltation of streams and the cutting of tress was established by George Perkins Marsh in 1864. Simply put, if too many trees are cut the water that was once trapped by their roots and leaves will run off in far greater amounts, taking soil with it and causing erosion. After establishing this relationship, Outwater proceeds to describe the orgy of logging that has gone on in America over the centuries. Cupidity beats up ecology and the forests and streams lose. The chapter becomes the history of the use of wood and logging; only at the end of the chapter are we reminded that there is a kinship between water and forests. So too with the chapters on the grasslands. Sea of Grass describes the ecology of the grasslands: how, among other things, prairie dog towns and buffalo wallows were essential to providing a route for water to reach to the groundwater. This is then followed up by the story of the destruction of the buffalo and the settlement of the plains. Readers are only occasionally reminded that they are reading about water. In fact, the first section of the book seems to take water as a loosely unifying force, a jumping off point, to recount the environmental destruction that has occurred in America since white settlement.

In the second half, Engineering the Waterways, the story enters more modern and more destructive times. Outwater traces, briefly, the careers of the both the Bureau of Reclamation and the Army Corps of Engineers. In the chapters, The Water Over the Dam and Mussels, Gators, and the Corps, the two demons of American water management are stretched over the rack, again. I am no apologist for the ills that either agency wreaked on the rivers of the U.S., but their sins have been told elsewhere, and in far greater detail. But, in the book^Òs defense, these stripped down versions of the histories of these two agencies will at least introduce the general public to a subject that needs more coverage. (Indeed, they are stripped down: the two histories take up a combined thirty pages.)

The remainder of the book chronicles the rise of industrial agriculture and the attendant pollution that arose from the increased use of pesticides. As pesticide use increases, Outwater reports that there was a decline in other types of industrial water pollution, thanks, in large part, to regulation by the EPA. Additionally, Outwater tells the history of wastewater treatment in American cities from the colonial era to the present, a dirty tale that as technology and understanding improved so did the quality of the water.

Water: A Natural History is nicely written, accessible book. It will charm readers who want to get a chronicle of the environmental destruction wreaked on the United States in the last few centuries. But, again, it will frustrate those who know that story and want to move on. The book is a cautionary tale; it is a warning and a recommendation. Outwater makes it clear that large portions of ecosystems in America have been subverted; that, for example, prairie dogs are considered vermin rather than vital players in a grasslands environment. And she advises that they be returned to the public lands, ^Óit is time to restore the balance to our land and allow nature^Òs engineers to do their work (p. 186). If beavers and prairie dogs are allowed to return to the public lands ^Óthe waterways will begin to regain their former pristine glory (p. 186). Will they? I do not know. But we will need more sophisticated books than this one if we are to determine what that ^Óformer pristine glory might have been.

[1]. For the history of the two agencies see the work of Norris Hundley, Donald Pisani, Donald Worster, Richard White, and Marc Resiner, among others.

This review is copyrighted (c) 1997 by H-Net and the American Society for Environmental History. It may be reproduced electronically for educational or scholarly use. ASEH reserves print rights and permissions. (Contact: Dennis Williams at the following electronic address: DWilliams@saul.snu.edu).

If there is additional discussion of this review, you may access it through the network, at: https://networks.h-net.org/h-environment.